What is The Average Age of Perimenopause? 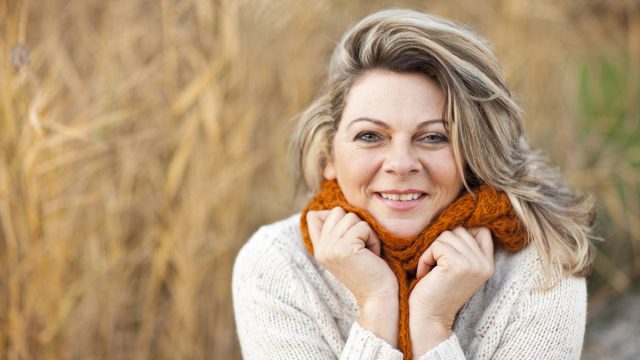 The average age of perimenopause and menopause can be scary to think about.

Perimenopause is the stage of life where we start to experience irregular periods leading up to menopause. We know we’re in menopause when we’ve lost our period for one year.

While the age of perimenopause varies from one woman to another, the average age of perimenopause is between 42 and 47 years old. Several factors can influence this age, such as the occurrence of irregular menstrual cycles, genetics, stress, socioeconomic factors, marital status, diet, smoking, alcohol consumption, ovarian surgery, and chemotherapy.

Some factors cannot be controlled, whereas others can be controlled and maneuvered to positively affect your perimenopause age.

If you have any questions or concerns regarding the most common factors, talk to your doctor.

Many studies have found that women experiencing irregular menstrual cycles will have a lower perimenopause age and less perimenopause periods. Perimenopause spotting instead of period may be common, too.

If a woman has had short period cycles between age 20-35, they’ll likely experience perimenopause symptoms early on, too, including perimenopause missed periods.

But, if a woman has had irregular periods between age 20-35, they’ll likely experience perimenopause later in life.

Irregularities do shift a woman’s cycle a lot more than we’d care to admit.

In addition to this, irregular menses throughout our lives are known to give us a later perimenopause age.

Just like women experiencing these irregular menses in their 40’s may start to wonder if perimenopause is on it’s way – and, it likely is if this is occurring.

The number one concern that’s risen in most case studies lately regarding perimenopause, menopause, and genetics is the correlation between mother and daughter.

If you really want to know and be prepared to know your menopausal age, sit down and have a brief chat with your mother.

Clue in on the symptoms she’s experienced, too. That way, you can prepare yourself if your body follows in the footsteps of her body.

Life stress, according to many leading professionals, doesn’t typically accelerate the average age of perimenopause and menopause.

However, social stresses can potentially cause a younger perimenopause age. With increased rates of perimenopause anxiety and depression, stress may get worse, leading to a younger age rage for this stage of life.

What stress can and may do is effect and change the regular menstrual cycle. For instance, if shifts at work are long, hours worked are sporadic, hours standing are outstanding, and heavy lifting is recurring, the menstrual cycle may be affected.

On the other hand, less educated and poor women point towards early menopause ages.

You see, social status can affect health and mortality. If there’s limited educated and limited money, nutrition, reproductive choices and stress can be indirectly affected, leading to earlier menopause.

Better healthcare for women in a higher socioeconomic status can also play a part. If you have less money and resources to get better healthcare, your menopause age may lower unexpectedly.

Which inadvertently points to geographical areas all around the world.

Geographical areas also have an effect on the age we start to experience perimenopause.

According to some studies, international and geographical areas play a large role.

For example, women living in developing countries do experience menopause earlier than in developed countries. The same goes for urban and rural areas – urban is later on than rural is.

To add, women living in high altitudes generally experience menopause approximately 1 to 1 1/2 years earlier than those living in low altitudes.

Oddly enough, marital status has shown to play a role in determining the age we go through perimenopause and menopause.

For instance, some studies have shown that marital duration and menopause age have a positive correlation.

To be more specific, unmarried women tend to undergo early menopause compared to those that are married or widowed.

The difference is only a year, two years, or three years, so it’s not dramatically different. Just a tad off.

There isn’t direct proof – but it does seem that having a male in the household may affect the stop of estrogen production and other menopause related symptoms.

Dieters typically ranged in at a heavier weight than nondieters, indirectly pointing towards higher weights and earlier menopause ages.

Caloric restriction can also affect pubertal timing. In addition, women who gain the most weight during early adulthood are known to experience perimenopause earlier, considering they’ve dieted more and/or are less successful at dieting.

To add, malnourished women stop menstruating earlier than nourished, and women greater in height and weight have a later menopause.

Meat and alcohol consumption are known to lead to a later menopause age, too.

If you’re currently on a weight reduction or perimenopause diet and exercise program, and it seems to be affecting your symptoms and/or early onset of menopause, speak with your doctor to see what you can do to make changes.

Other common diets like the keto diet or exercise programs seen on television may need additional information from your doctor.

There’s actually very limited data on smoking, alcohol, and use of contraceptives.

Plus, in the studies that have been conducted, women have the choice to be shy in admitting their usages considering they don’t want to feed into the social stigma.

One thing that has been found in few studies is that smokers do experience perimenopause at an earlier than average age.

Quitting smoking in your early 40’s may have a positive effect on menopause, but little information has proven this prediction.

Even still, further studies have found that women with a lower weight or increased upper body fat distribution is likely linked to early age menopause in smokers.

Heavy smokers have an even earlier menopause compared to light smokers, and this is due to the polycyclic aromatic hydrocarbons in the cigarettes. They can be toxic to ovarian follicles, resulting in premature loss of ovarian follicles.

Estrogen has also been presumed to be more rapidly metabolized in smokers livers.

However, very little is known about menopause and women experiencing secondhand smoke.

Moderate alcohol usage does have it’s pros and cons. Some benefits that it does have include reducing your risk of heart disease, ischemic stroke, and possibly diabetes.

However, experiencing menopause later in age (due to alcohol consumption) may cause an increased risk in breast, ovarian, and uterine cancer.

Other than that, there isn’t much evidence pointing towards the exact effects of alcohol on a woman’s body before perimenopause, or leading up to perimenopause.

The risk of uterine and ovarian cancer typically increases by 5% with each increasing year of age at menopause.

Meaning, the later you experience menopause, the more at risk you are for uterine and ovarian cancers, then leading to ovarian surgery.

However, menopause can be natural or surgical, and if you remove the ovaries without contracting ovarian cancer, you may trigger perimenopause and menopause early on.

Talk to your doctor about your options to see what you can and can’t do.

While undergoing chemotherapy, women may start to experience irregular menstrual cycles. Some of the medications used to administer chemo may also damage the ovaries, leading to menopausal symptoms or menopause itself.

If menopause is triggered by chemotherapy, the symptoms may be immediate, delayed, temporary, or permanent.

Cancer treatments may and can vary in effect regarding perimenopause and menopause.

There is no way to tell or measure accurately what chemotherapy can do in a woman in her 40’s or 50’s.

According to research, chemotherapy doesn’t often trigger symptoms associated with menopause. Naturally, symptoms of menopause are delayed instead of brought on.

To add, menopause symptoms may stick around for years after chemotherapy treatments have stopped.

If you need any perimenopause treatment or perimenopause supplements in addition to the chemotherapy treatment, your doctor may have a suggestion or two to help out.

Welcome to Martha Colton. We go through significant changes when we reach menopause. It can feel overwhelming… Let’s learn to enjoy our second spring together.
Recent Articles